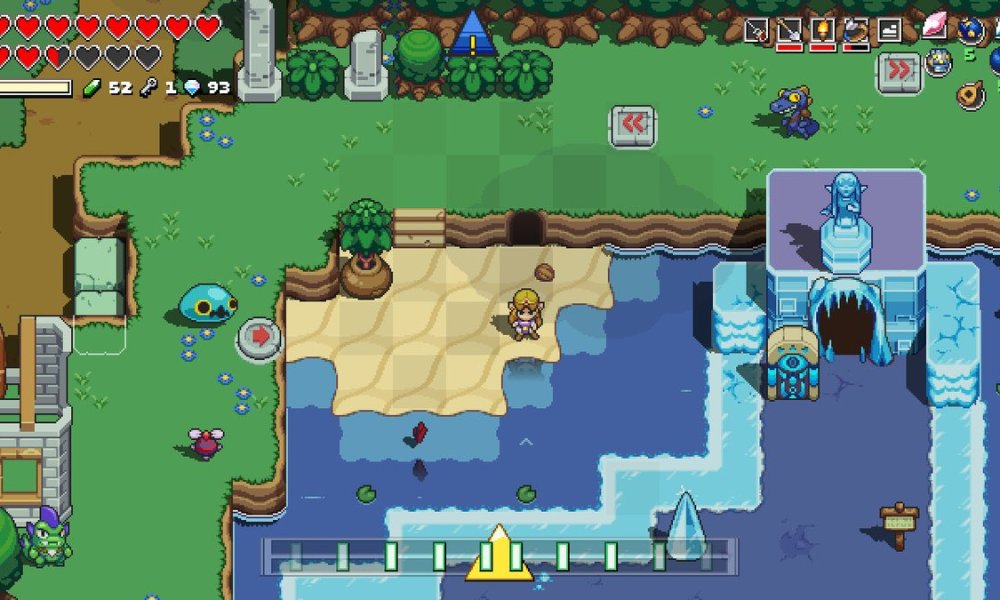 If you handed me Cadence of Hyrule: Crypt of the Necrodancer Ft. The Legend of Zelda, without any prior knowledge of the indie game that preceded it or the promotional materials ahead of its launch, I suspect I’d have been hard pressed to realise that it wasn’t a Nintendo developed Zelda game. Okay, the overly lengthy full title of the game might give me a slight clue, but the quality of the game itself certainly wouldn’t have clued me in, which is a real achievement worth celebrating.

For anyone unaware, Cadence of Hyrule is an officially released Legend of Zelda game, made by a team of indie developers. Brace Yourself Games are best known as the developers of 2015’s Crypt of the Necrodancer, a punishing top down roguelike game where players have to move around dungeons, attack monsters, and generally interact with the world to the tempo and beat of the game’s soundtrack. The game was lauded for its creative concept, but was also notoriously difficult to complete, with death essentially setting you back to square one. It was a tough game, and one that it was hard to find comparisons to in other titles.

Cadence of Hyrule is basically a new Crypt of the Necrodancer game, set in the world of The Legend of Zelda. You can play as Link or Zelda, visit familiar locations from past games, and collect a suite of familiar items by simply using the directional buttons to hop and attack. While it’s certainly easy to compare Cadence of Hyrule to Crypt of the Necrodancer in terms of basic mechanics and structure, the differences between the two games are vitally important to making Cadence of Hyrule feel like an authentic Nintendo developed Zelda game.

While Cadence of Hyrule is still a top down roguelike adventure like Crypt of the Necrodancer was, the difficulty of its roguelike elements has been drastically toned down. Where Necrodancer would cause you to start essentially from square one after death, Cadence of Hyrule allows players to keep all of their progression based items after death. Heart containers, discovered weapons, warp points within the world, upgrades, progression based tools and progress uncovering the game’s map persist after death, as do many aspects of the game world such as shortcuts unlocked in dungeons and discovered secret passages. Sure, you lose your rupees and ammo upon death, but that’s never a major barrier to progression.

While the world of Cadence of Hyrule is randomised each time you create a save file and start a playthrough, the game world is largely not randomised if you die within that playthrough. Combat focused floors of dungeons may see some minor randomisation between attempts, but the overworld layout, location of dungeons, locations of items, and NPC placements will all remain consistent within a playthrough of the game. This allows players to make tangible progress, and not feel like they’re struggling to improve while traversing the world, but additionally allows for each playthrough to feel unique. I have played through the game twice already, and as a fan of playing Link to the Past randomisers, this really scratched an itch for me. I really enjoyed that I could experience the same basic content in a fresh way more than once.

In terms of the game’s overall look, feel, and sound, Cadence of Hyrule really feels spot on as a Zelda game. The art style of the game feels like a vibrant mix of Link to the Past and Minish Cap, with more modern Zelda enemies such as Breath of the Wild’s design for the Lynels being given retro style designs that feel right at home with more classic creature art. The soundtrack is largely composed of remixes of existing Zelda music, but tracks which have been cleverly remixed just enough to feel fresh and unique, while still recognisable. The music is authentic, without being a retread of existing ground.

The world design, including puzzle layouts with multiple solutions, also feel very in keeping with the original source material. The ways the game combines multiple existing Zelda items to form the solutions to more complex puzzles feels fantastic, and there are still numerous optional puzzles I have found in the world that have me scratching my head when I return to them.

While I was incredibly impressed by the sheer quality of Cadence of Hyrule from start to finish, and personally loved the game, it does feel important to acknowledge what will likely be the most divisive factor of this game, its length and how that relates to its gameplay structure. 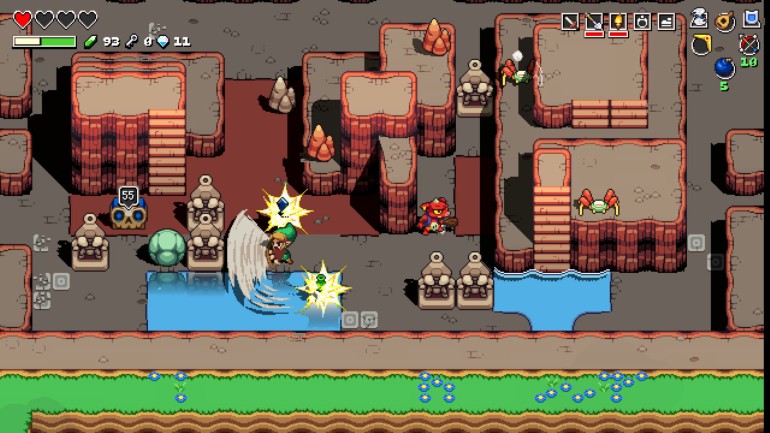 Cadence of Hyrule takes around six hours to complete on a blind first playthrough, exploring every square of the map but not finding every single item, and around four to five hours on a subsequent competionist playthrough. Much of the game’s value comes from its light randomisation elements, the fact that you can play it through multiple times as different characters, with different map layouts, with options like permadeath switched on, and similar modifiers designed to keep the experience fresh.

If you are only interested in playing through Cadence of Hyrule a single time, you may well find yourself disappointed. I personally love the idea of a Zelda game that only takes six hours to beat, and I can come back to every few months for a fresh experience, but if that’s not your jam you’re going to need to know that going in. You have to either be okay with it being a six hour creative Zelda title that does something very new, or be someone looking for a Zelda game they can come back to multiple times for a varied experience, otherwise you may struggle to enjoy this title.

As I said up front, Cadence of Hyrule feels incredibly well made for an indie spin off title, and honestly manages to stand proudly alongside Nintendo developed Zelda games. It’s short, but full of creative ideas, challenge, and charm. If you’ve been itching for a new top down Zelda game to tide you over until Link’s Awakening releases, and have a soft spot for music rhythm gameplay, I can’t recommend Cadence of Hyrule highly enough.

[If you enjoy my work, consider a small monthly donation on Patreon. Your donations are what support me being able to do this job full time.]