A Rundown of The 2019 Yu-Gi-Oh World Championships

Over this past weekend, I was lucky enough to be invited by Konami to visit the 2019 Yu-Gi-Oh World Championships in Berlin. As a lapsed player of around a decade, I have been excited to get my hands on the upcoming Switch game (hooray no microtransactions), and as such took them up on their offer in order to get myself back up to speed on the rules, and into the Yu-Gi-Oh mood.

The Saturday of the tournament was honestly not particularly interesting to attend as a non competitor. Matches were held behind closed doors, with strict silence enforced, and wide areas around players that you were not allowed to enter. It was pretty much impossible to actually watch the first day of matches in real time as press, and most of my insight into the first day’s competition came from asking competitors about their matches after the fact.

Some matches were livestreamed, but the stream faced severe tech issues and was on a five hour delay, meaning that even watching that stream I was often behind the news on who had made it through to further rounds.

I largely used that first day as an opportunity to read up on and research the main competitive deck of the tournament, the Salamangreat deck archetype, which you can read about here. I was not fully informed on interview opportunities, or the presence of copies of the upcoming Switch game Legacy of the Duelist: Link Evolution, which would have been positive uses of my time at the venue.

Sunday afternoon, when the tournament was down to its final three pairs of competitors, we finally moved to matches being presented in real time with a public audience in attendance, and at that point things very much picked up. There was a decent energy, I was able to watch matches unfold in real time, and there was a lot more pageantry to proceedings.

The day kicked off with a five minute long DJ set based mainly around the original Yu-Gi-Oh duel monsters anime theme tune. A lot of cheesy use of “It’s time to D-D-D-D-Duel” sound bites and similar. It was kind of cheesy, but in that way that perfectly grabs nostalgia if you were into the show around the era I was when it first aired in the UK.

Oh my god they’re kicking off the finals with a live DJ set of the original YuGiOh anime theme haha pic.twitter.com/JvM4eTZiBT

From here, we got a bunch of again very cheesy, but somewhat endearing, in character conversations from the voice actors for Yugi and Kaiba from the original series. These two older male voice actors are clearly really good sports about the whole idea of being in character hosts, managing to push through the obvious mental disconnect of seeing Yugi’s voice come out of an old dude with a big Santa beard. They’re willing to commit to the bit, and it really did work.

They also leaned heard into cheesy nostalgia in terms of things like music choice. I have not thought of Kaiba’s angsty song in the Blue Eyes jet about having no friends, or Joey’s song about being closer than brothers, but having to fight each other, for years before this weekend. I love those tracks. They’re terrible, but I love them unironically

The first hour of the event was an in character scripted duel between Yugi and Kaiba, with all the cards clearly pre prepared in order to simulate the show’s Heart of the Cards style always drawing the correct card mechanic. There was a little bit of anime card logic, and a little bit of unbelievably good luck to ignore, but it was a really enjoyable recreation of what made the original show great. It tried to stick pretty close to the real world TCG rules, with explanations of each move as it was made keeping the pace slow enough for a lapsed player to follow, and the dramatic tension well executed. It was dramatic back and forth theater, but honestly just super enjoyable to see. I enjoyed the fact the duel stuck away from Synchros, Pendulums, XYZ and Link summons for the most part, and I was particularly impressed by the fact they took time in character to explain how the new play area layout now allows for situations with six monsters on the field.

With the voice actor match out the way, we first got to see the Kids finals TCG match between Sun Shang-En from Taiwan and Vitus Krough from Denmark. Unsurprisingly it was a Salamangreat mirror match. The match had no formal time limit, which made me feel really sad for the kid who failed to make it to the top 8 on livestream the previous day due to a penalty for playing to slowly.

If you’d like to read up on the specifics of how Salamangreat decks work, you can read my write up here, but the basic information on the first round is that Sun took the round incredibly quickly, as a result of having a Salamangreat deck designed specifically to take down mirror decks. Cards like Super Polymerisation were used to great effect to use his opponent’s quick advantage generation against him. Sun also took the second round in a fairly dominant fashion, with his opponent Vitus conceeding defeat with a gracious smile and a handshake. It was clear that his standard Salamangreat simply couldn’t keep up with a deck which had taken the risk of including cards explicitly for mirror matches. Sun took a risk, hoped he would get placed into largely mirror matches, and it paid off for him.

From there, we moved over to the Duel Links Finals. For those not up to speed, Duel Links is a Yu-Gi-Oh app which I don’t play, because it’s full of pretty aggressive microtransaction prompts and no secondary card market, making it if anything more of a potential money sink than the actual TCG. It’s played with only three spell and trap zones, only three monster zones, a smaller deck size, special abilities you can set before the match, and many of the newer summon types not included. It’s a faster paced version of the game, and one I would be pretty into if the monetisation was less aggressive. It’s also the basis for a physical Yu-Gi-Oh card game variant, called Speed Duels.

Rather than the TCG’s best two out of three format, using a single deck with side deck swapping, Speed Duels instead uses a best three out of five format, forcing players to switch decks between matches. The format helps the finals not be over too fast, and also theoretically introduces more variance, avoiding the TCG issue of a clear meta deck being pulled out for constant mirror matches.

The Duel Links finals were between two Japanese players. Takahiro was last year’s world champion. He only drinks energy drinks and forgets to eat because he’s too excited about Yu-Gi-Oh, which is a big mood. Seriously, I forgot to eat until 8pm on the day of the finals, I get it super endeering shy competitor. He was super shy on camera, really endeering, and even though he was the returning world champion I was really rooting for him.

His opponent was Kobayashi. How do I explain Kobayashi? Well, he apparently thinks Yu-Gi-Oh and wind surfing have a lot in common. He did not explain what they have in common. Because he left me hanging on that, I wasn’t rooting for him. Withholding information like that? A true heel move.

Kobayashi absolutely wrecked on round one with a Six Samurai themed deck. He had such a strong opening turn his opponent instantly ended his turn accepting defeat. Takahiro didn’t play a single card, he simply ended his turn with an empty field to accept defeat. We never even got to see what type of deck he was planning to run in the first round, just the impressive chain he was up against. 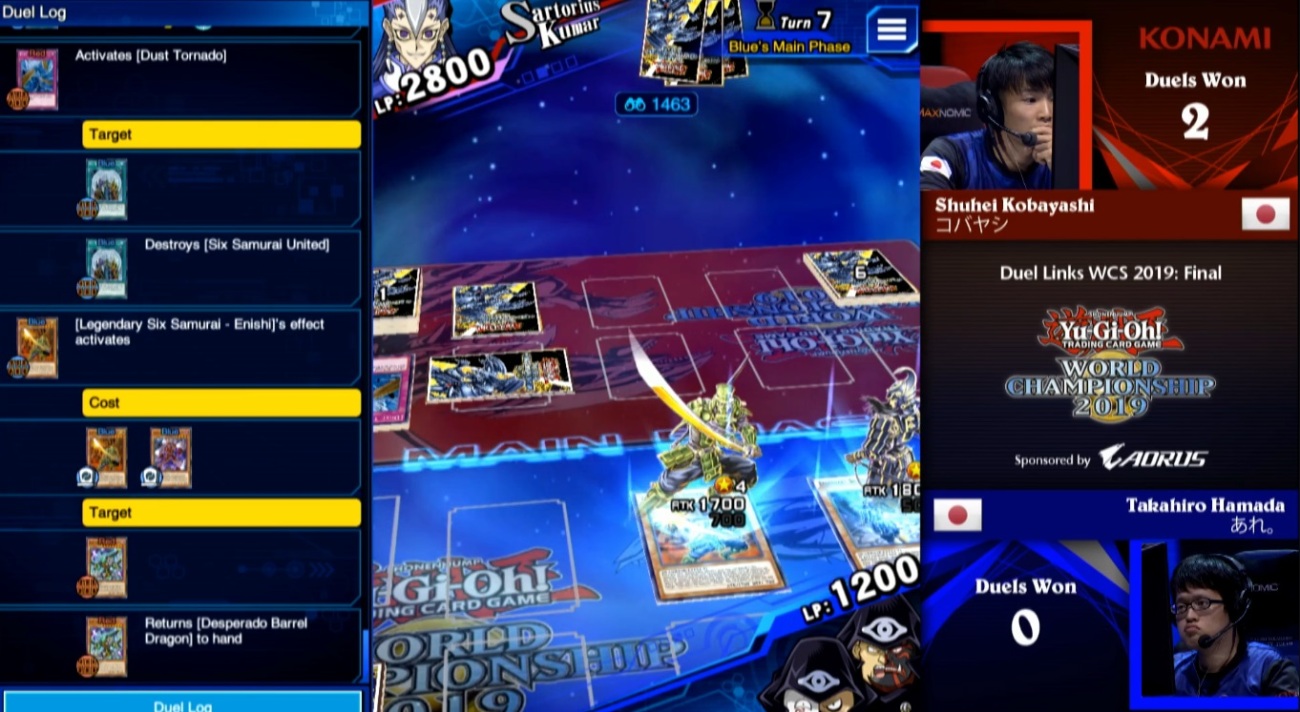 Kobayashi also swept the second round, which was a mirror-ish match between Magnet Warriors and Electro Magnet Warriors. Things were looking pretty dire for Takahiro, the returning champion would need three straight wins to claw back his title. However, it was not meant to be. Round three was another very fast and clean win for Kobayashi, who took down the existing champion in a way that looked almost effortless. He later attributed his success to luck, and he undeniably had probably the strongest possible starting hands for each of his rounds, but it’s also clear he really knew what he was doing, and was prepared for his opponent.

Lastly, we had the adults TCG finals to watch, another Salamangreat mirror match Chai Ching Wang From Taiwan, returning champion, who was using card for card an identical deck to the kids champion winner from earlier in the day, Vs Kouki Kousaka from Japan, who apparently has no hobbies outside Yu-Gi-Oh, again something I at one point in my life would have very much empathised with. Kousaka was friends with the 2017 World Champion, and wanted to win to prove to his champion friend he could manage it too, which really gave him the kind of Joey style protagonist sidekick energy that was really easy to root for in the room while watching the match play out.

Both players ran very similar kinds of Salamangreat decks, focused on the eventuality of mirror matches. They both made use of Pot of Desires early on, getting extra cards they would have to pay back later, counting on short games in terms of numbers of rounds. They both ran hard with Super Polymerisations, Mind Controls, and other cards designed to take advantage of any forward momentum the enemy made.

Ultimately, protagonist sidekick Kousaka took the win on the first two rounds, by just being stronger in terms of his shutting down of his opponent. It was a tense and well balanced match, and one that was well worth watching to truly appreciate the top end of what the deck archetype can do.

And with that, the event was over, with me heading home to think a bunch about how much I miss playing Yugioh, but never want to actually buy the cards because I am a compulsive shopper, and how I can’t wait for that upcoming Switch game that has no microtransactions so I can get back into being a big Yu-Gi-Oh nerd. Attending in person really hit enough nostalgia points, and gave me enough of a sense of the modern game, that it really got me excited about Yu-Gi-Oh in a way I have not been in a long time. Even if I won’t play the TCG or Duel Links, I can’t wait to play more rounds on my Switch, or watch more tournaments from a distance.