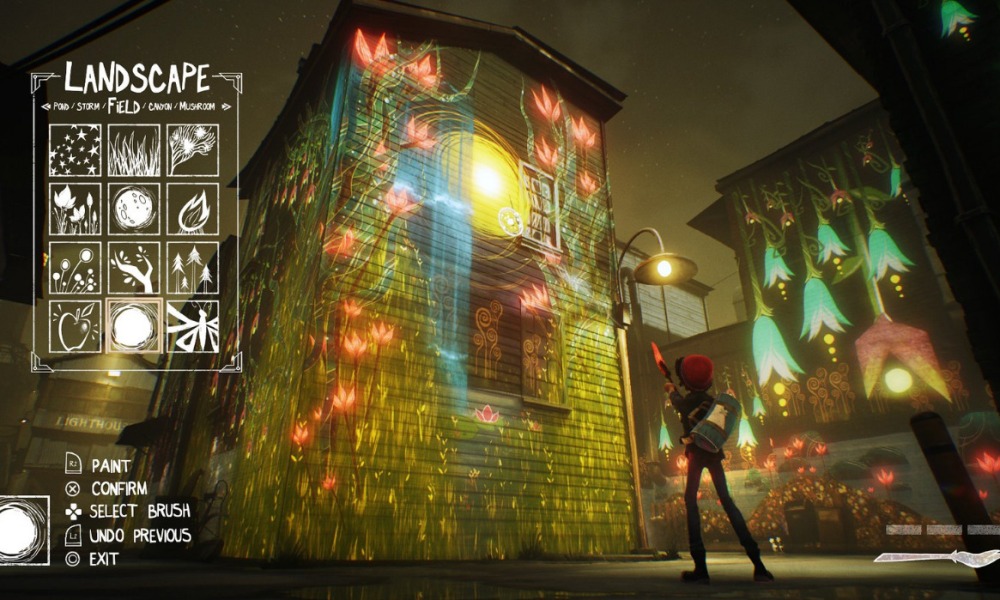 When it comes to creating visual art, I love the act of creation, but my end results are not good. A lack of a proper visual imagination, paired with a couple of mental health conditions impacting co-ordination, and I struggle to both picture what I would like to create, then put that idea onto the page. I love making art, even if I am not technically good at it.

Concrete Genie is a PS4 exclusive, and as a game largely about creating art I was unsure whether it was going to be a game I got on well with. The general premise is that you play as Ash, a young artist who is being bullied by older and bigger kids in his town. The town he lives in is derelict, in a poor state of repair, and the people living there are pretty miserable. When kids in the town rip up Ash’s sketch book, he is forced to go and track down the missing pages with the help of one of his drawings which has come to life, and provided him with a huge neon magical paintbrush. Recover the sketch pages, paint the town with light and color, and hopefully fight back a little of the town’s growing despair.

While the plot is at times a little simplistic and melodramatic, there is actually some depth to be found in the story of the town, and how it has fallen apart. The story touches on themes including how damage to towns can become a self fulfilling prophecy, and has some discussions about our real world I was not anticipating from a game so colorful and full of childlike simplicity.

Mechanically, Concrete Genie’s biggest strength and biggest weakness is in its core gameplay loop, painting graffiti onto buildings. In terms of progressing through the game, things are actually really really really simple; Each area has a small number or walls which you need to cover with a specific amount of graffiti. The bullies are walking around, so you need to avoid them, but you don’t need to do anything too specific with those walls that need painting, they just need to have been painted. Painting those walls unlocks a door, beyond which you’ll find the next few walls needing painting, and progress. At its core, there is very little challenge preventing you progressing.

While this is on paper something worth knowing about Concrete genie, something which may turn off some players, for players like myself this was actually the game’s biggest strength. I was painting the levels more than I was required to, not because I needed to but because I wanted to. When a game’s core mechanics are fun enough you find yourself doing them outside of progression, you know a game is doing something right.

In Concrete Genie, players can paint on pretty much every surface, and while painting on every wall in the game doesn’t get you any extra rewards, it changes the feel and tone of the in game town, which ultimately feels like its own reward in the narrative. Players paint using pre-made sketch pieces, adding to their selection by retrieving more of those lost sketch book pages mentioned earlier, and then create art by painting these existing sketch pieces onto walls. These art pieces come in a wide enough variety of styles, and adapt well enough to being stretched, rotated, combined that they can create a real variety of end resulting pieces. The game does a lot of work automating connecting pieces of art, and layering them for the player, to ensure that your end resulting art looks really good. For someone like me who sucks at making art, I was able to create things I was really proud of with relative ease.

There are also sections where you create new drawn monster friends to help you through your adventure, and this is also done via drawing and using sketch parts. The fact that these drawings then come to life, animating and moving through levels believably while staying true to your design is constantly charming, and kept making me smile. I felt reminded of trying to design characters as a child, slapping parts onto a shape and making up a story for why it looked that way, and it brought me some real joy.

The fact that the game doesn’t rank your art quality does make progressing through the game technically simple, but also made me unafraid to create freely, without fear the art I enjoyed making would be deemed not good enough. It’s artistic creation for the sake of creating art, not to be told externally it’s good, and there is something really beautiful about that.

The game does contain a small amount of combat towards its end, which is flashy but lacks substance. I understand why it’s there, it’s just a shame it doesn’t feel as polished as it looks. The game also has a couple of VR modes where you can use two move controllers to paint, but you can’t play the whole game in VR which is a real disappointment.

Concrete Genie is a pretty short game, at roughly six hours to beat, closer to ten to be a completionist with, but it tells a pretty beautiful tale. Sure, it’s easy to beat, but simply seeing the end isn’t really the point. The point is to bring some positivity and hope back to a town convinced it has no prospects. The quality of the art is less important than the simple act of creating. Make something you care about, put it out in the world whether it is perfect or not, and hope it brightens someone’s day. It’s not a game to play if you’re looking to be challenged to make technically good art, but if like me you suck at creating and want to feel like you’re making gorgeous art that helps brighten the world, that particular power fantasy is a big part of what makes this game so delightful.

Even now, I want to jump back in and paint those last few walls I never got around to.