Back in November 2019, when Death Stranding first released, I honestly didn’t understand quite what the appeal of the game was meant to be. The first major release from creator Hideo Kojima since his departure from Konami, the man previously associated most with the Metal Gear Solid series had released a game that was undeniably gorgeous, but took hours and hours to really start showing what it would eventually become. I put in a decent number of hours playing the game when it first released, but it wasn’t until revisiting it a few months later that I started to make sense of what other people enjoyed about the game, and what aspects of it I enjoyed myself.

To try and simplify the core concept of Death Stranding, the game is set in a post apocalyptic world in which rainfall causes time to accelerate for anything it touches, anyone who dies risks becoming essentially a nuclear bomb ready to detonate, and invisible monsters roam the earth’s surface. Humanity has largely retreated to living in underground bunkers, isolating themselves and refusing to help others with their problems. You play as a delivery porter, running packages across America, trying to convince isolated people to trust the government enough to hook their bunkers up to the internet, which is now powered by a magical dimension that transcends time and space, allowing for huge amounts of data and matter transfer near instantaneously. By transporting packages across the country, and befriending shelter dwellers enough they agree to go back on the grid, the idea is that you slowly rebuild America from the ashes, giving hope and connection as you travel.

Oh, and you have a baby in a pod strapped to your chest, because it’s somehow magically still tethered to its dead mother, and that connection to the dead lets you see ghosts. Everyone around you will insist the bay is simply a functional tool, but it awards you likes and sings with you, and it’s clear from the start this is a living sentient baby. 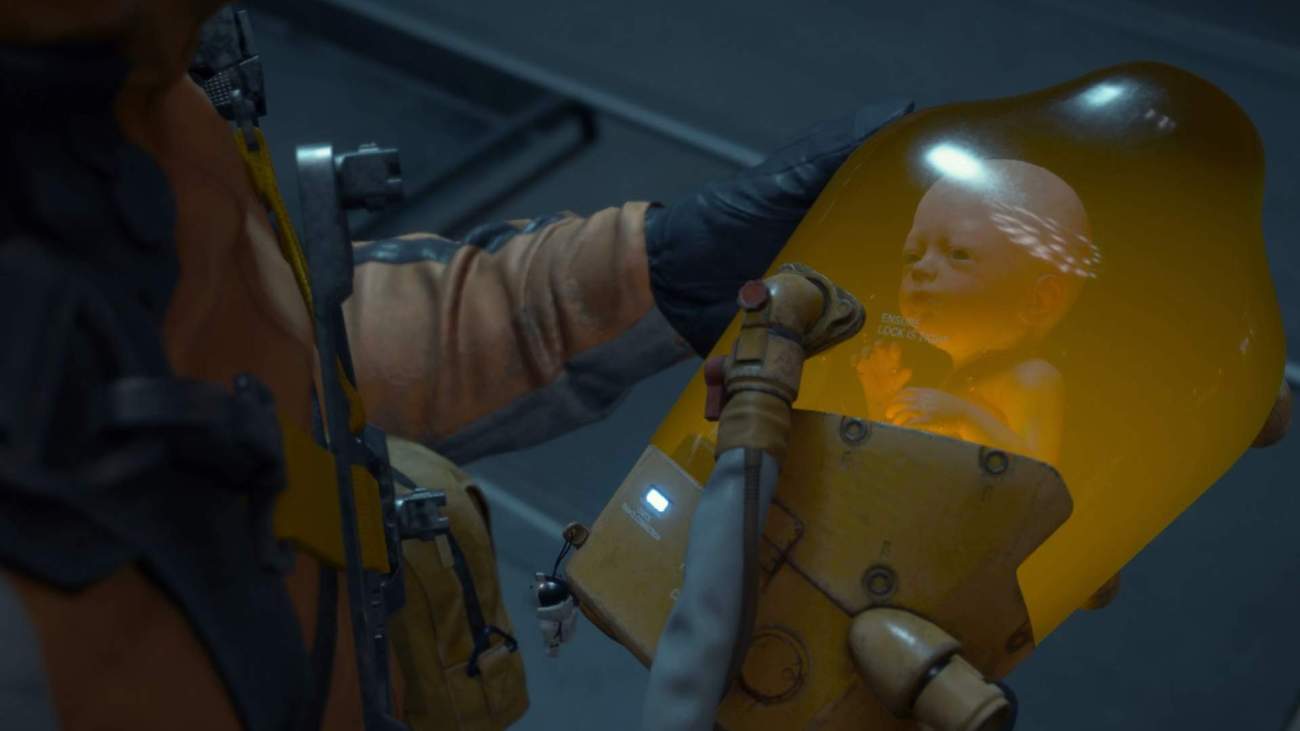 Now, right off the bat, I don’t think the opening hours of Death Stranding do a good job at all of representing what the final game is about, and I believe that the game’s weak start is a big part of why it didn’t originally click with me. For a good chunk of the first ten hours of the game, you’re basically running across beautiful but empty landscapes, backtracking regularly, and trying not to fall over. The game initially sets your character with large amounts of cargo to carry, very little support in transporting it, and a big part of the early game is about trying not to trip over small rocks and drop all your equipment off a mountain because you went too fast. I can appreciate a game about taking walks in nature, or enjoy a game about deliberately obtuse controls, but in combination with the long backtracking times I found the game’s opening hours fairly dull, frustrating, and uninteresting. I feel like this may have been deliberate, and I’ll get to why later, but on first playing this was a huge roadblock to enjoyment.

Additionally, for the opening hours of the game, many of the most notable features, such as non lethal ways to fight enemies, and the ability to work with others online to develop infrastructure, are unavailable. Again, while this may have been deliberate, it caused the opening ten or so hours to feel like a lot of needlessly hard work.

So, what made my opinion change after putting more time into playing? Well, largely, it was the sense of community, improved gear, and the ability to create a satisfying network of transport options that didn’t require always tripping over small rocks every journey. Firstly, the most simple thing that improved my experience. As you progress through Death Stranding, you unlock gear, from powered exoskeletons, to otter shaped hats, which all serve to make the basic act of traversing the world less of a chore. Being able to carry more equipment at a time, stumble less frequently, walk through deeper water, and more efficiently run makes a huge difference, making world traversal more of a relaxing pastime instead of a stressful task. Considering the majority of the game is about walking from place to place, this made a massive difference to my moment to moment enjoyment. Once I was less concerned with falling over my own feet, I could more easily stop to take in my beautiful surroundings, and enjoy the act of being in the game world.

Secondly, let’s talk about the online communication features of Death Stranding. Put simply, the more time you spend investing in five star completing missions for people across the map, and the more people you encourage to connect to the government internet grid, the more often you’ll start to see player generated structures and signs populating your own game world. From expensive player made bridges built for you that help to more safely backtrack through dangerous areas, to ladders and ropes positioned in high traffic areas that will save you using up your own supplies, there’s this real sense over time that by narratively going around the world making connections and helping people, mechanically you’re being rewarded by starting to see other players kindness and hard work in your world. The more you do to help others, the more you’ll find others work helps you progress. The game’s opening hours are likely so desolate in order to make the eventual spawning of player made structures feel like more of a substantial reward earned, but I do feel like this aspect of the game takes too long to really start showcasing its appeal. It takes quite a long time before it’s really clear why you should care about other players presence in your world, one of the more interesting ways of blending narrative and mechanics.

Thirdly, while combat is not a huge part of Death Stranding, I feel like the game waiting so many hours before starting to make combat more common was a mistake. While it’s certainly not the focus of the game by any means, the threat of combat, and the dramatic tension of boss fights, are the only real source of tension and danger in a lot of your deliveries, and sprinkling them in regularly as an obstacle to break up the flow of the late game really helps improve the pace of the experience.

Lastly, let’s talk about the biggest aspect of the game I have come to love over time, getting to develop a thorough transport network across America. While much of the initial game is about slowly walking across the nation, dropping off a package, then retracing your steps, as time goes on a couple of options open up that speed up journeys to and from familiar locations. You’re able to build networks of roads that, while initially too expensive to complete up front, allow for driving large amounts of cargo a decent chunk of the way to and from your destination. When driving, you don’t have to worry about falling over, and you can much more easily just forget about anything but enjoying your journey. Once the full road network is eventually complete, you’ll still need to walk from the nearest road to delivery locations, but the amount of backtracking on foot is cut down immeasurably.

However, while the road network is largely built by dropping off resources to complete roads the game developers have already planned out the locations of, the real joy of the late game for me was the Zipline system, where players can create pylons around the world, and zip between them as the crow flies at ridiculous speed. There’s a limit to how far apart ziplines can be placed, and how many of them you are able to have on the map at any one time, so planning out carefully which road junctions, delivery bunkers, and mountain peaks to place them on is a really intricate task. These Ziplines don’t entirely replace walking around the map or driving, trucks are still useful for larger volume deliveries, and you need to walk to a location before you can build a zipline pylon there, but it basically allows players to travel to and from locations they’ve explored on foot with much greater ease.

While mechanically these ziplines might as well be fast travel points, the fact that the game world zooms by in real time, quickly, without loading screens really serves as a reminder of how far you’ve come on your adventure, and helped contextualize just how much work i had put in rebuilding the country to get to that point.

With that all said, I still have some issues with Death Stranding. Beyond its slow start not really showcasing what the game has to offer, I think it’s fair to say the game’s narrative is bonkers nonsense. Don’t get me wrong, it’s often really fun bonkers nonsense, but a lot of the characters you meet along your journey are ridiculously one dimensional, Kojima really seems to dislike the idea of subtext, and many character’s defining traits are incredibly transparent. I don’t feel like I was wrong to be critical of the game’s opening hours, and I still maintain a game that requires ten or more hours of play to start clicking with has some major design issues, but after a few months of perseverance I do feel quite positive about my time with the game, and do much better understand why some people out there love it.

Oh, also, the in game email about how non binary people are created by the apocalyptic world ending event is not a good plot point, and really didn’t need to be a part of this game. Just needed to get that said. Right. I do like the game generally though.